Our Vice-President, Jenny, and Secretary, Warren, have now received the hard copies of the Certificates of Achievement they recently received from The Royal Australian Historical Society. 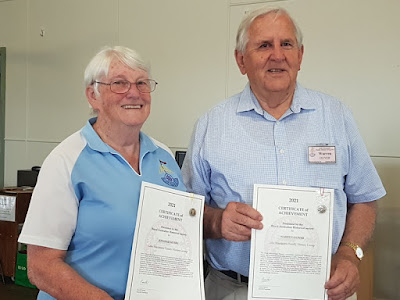 Served bravely and suffered during The Great War, resting at Sandgate Cemetery, have I been forgotten?
85 years ago today, on the Sunday afternoon of the 22nd November 1936 (7 funerals on this day), Lance Corporal William Wallace Croker (M.M.), 14th Battalion (Reg No-6804), teamster from Redhead, New South Wales and Stuart Street, Charlestown, N.S.W., was laid to rest at Sandgate Cemetery, age 45. ANGLICAN 1-17. 41. 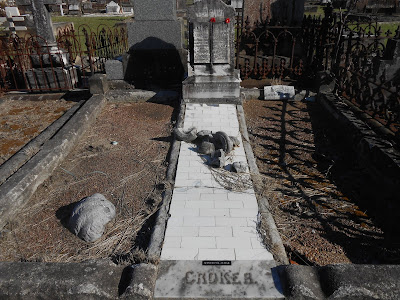 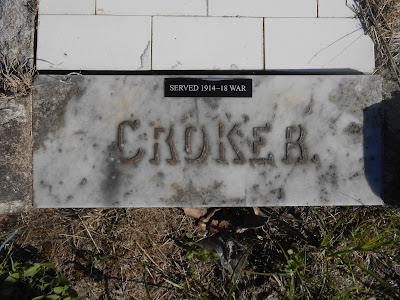 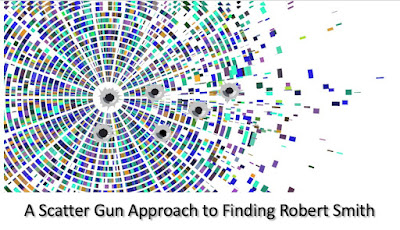 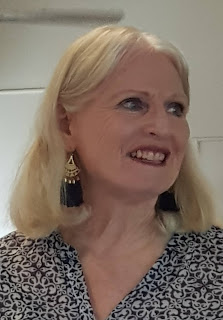 Our members were treated to an entertaining and informative presentation by Committee Member, Jan Butcher, at our monthly meeting at Marmong Point yesterday.
A longterm member whispered after the talk that it was one of the best presentations he had ever witnessed at our Group. This member's sentiments were echoed by all who were present in person and online via zoom.Supported by an excellent slideshow with graphics that complemented her talk Jan took us along on her research journey to find her elusive Danish ancestor, Robert Smith, a former resident of Newcastle.
Jan is leaving no stone unturned as she seeks Robert's birth date and place and perhaps his real name. We wish her luck as she continues her hunt.
at November 21, 2021 2 comments:

Served bravely and suffered during The Great War, resting at Sandgate Cemetery, have I been forgotten?
71 years ago today, on the Friday afternoon of the 17th November 1950, Private Robert Smith (M.M.), 30th Battalion (Reg No-2495), wheeler from "Maudville", 93 Teralba Road, Adamstown, New South Wales, was laid to rest at Sandgate Cemetery, age 57. ANGLICAN 2-141. 71. 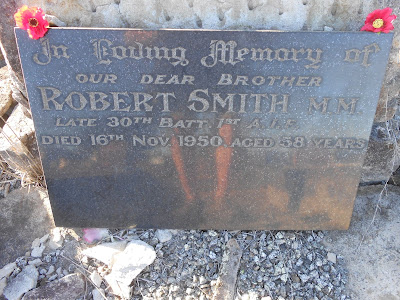 http://nla.gov.au/nla.news-article134386077 - funeral notice states service.
Born at Catherine Hill Bay, New South Wales on the 24th August 1893 (as Richard A) to George Robert and Clara Smith, Robert enlisted August 1915 at Newcastle, N.S.W.
http://nla.gov.au/nla.news-article137105449 - farewell from Kitchener Hall, Adamstown, N.S.W. (as H. Smith).
Admitted to hospital 14.4.1916 (mumps).
Wounded in action - 29.9.1917 (GSW right arm, Battle of Polygon Wood).
http://nla.gov.au/nla.news-article138735930 - reported wounded.
http://nla.gov.au/nla.news-article138740099 - report that Robert being discharged from hospital.
Robert returned home July 1919, being discharged on the 13th September 1919.
http://nla.gov.au/nla.news-article139441607 - welcome home.
Awarded Military Medal, 15th September 1919.
'For conspicuous gallantry and devotion to duty in the operations near NAUROY from 29th September to 1st October 1918. This man is a stretcher-bearer, and with [2733] Private WHYATT, M.M., rendered untiring service in carrying wounded men under intense shell and machine gun fire. On 30th September an intense barrage fell on our front line posts, which were under direct observation from the enemy who was only 300 yards away. Two men were severely wounded by the barrage and Private SMITH with Private WHYATT immediately rushed forward from Company Headquarters passing through the barrage and in spite of heavy machine gun fire directed at them carried one wounded man back and returning a second time, again passed through the barrage and came under concentrated fire from at least 4 enemy machine guns. With the utmost determination and disregard of personal danger they stuck to their task and brought the second wounded man back. Though exhausted, Private SMITH stuck to his task, and before the Company was relieved, carried out several wounded men passing over an area which was continually under the direct fire of enemy field and machine guns.'
Mr. Smith’s name has been inscribed on the Adamstown Citizens' Memorial, Adamstown Municipal District Roll of Honor and The Capt. Clarence Smith Jeffries (V.C.) and Pte. William Matthew Currey (V.C.) Memorial Wall. Name possibly inscribed on the Adamstown St. Stephen's Church of England Roll of Honour (possibly names inscribed are only the Fallen), whereabouts unknown.
I have placed poppies and a 1914-1918 WAR label at Robert’s gravesite in remembrance of his service and sacrifice for God, King & Country.
http://sandgate.northerncemeteries.com.au/.../index.php...
Contact with descendants would be greatly appreciated.
Lest We Forget.
at November 17, 2021 No comments:

The Crafts of Cooranbong

The newspaper collection at Trove Australia recounts many stories of Craft Family members from the Cooranbong area.

Robert Craft was in the winning team in 1946.

Served bravely and suffered during The Great War, resting at Sandgate Cemetery, have I been forgotten? 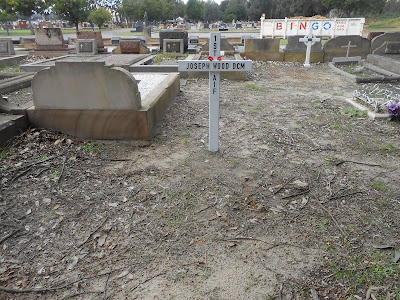 http://nla.gov.au/nla.news-article140350884 - funeral notice states service as Sgt./Major and Boer War.
Born at Ohio, U.S.A. (June 1869? or 1873?) to ? and ? Wood; husband of Elizabeth Wood nee? (married 23.5.1918, no marriage certificate with Service Records, did not return home with Joseph, died?) of 207 Upholland Road, Orrell, Lancashire, England, Joseph enlisted September 1915 (stated age 42 years, 3 months, could have been 46) at West Maitland, N.S.W.
http://nla.gov.au/nla.news-article137972509 - report of farewell being organised by the Islington Military Presentation Committee.
http://nla.gov.au/nla.news-article137967992 - report of presentation.
Wounded in action - 12.10.1917 (GSW left knee, 1st Battle of Passchendaele).
Awarded Distinguished Conduct Medal 5.6.1917.
'For conspicuous gallantry and devotion to duty. He displayed great courage and devotion in carrying out wounded under heavy fire in daylight.'
Joseph was invalided home June 1918, being discharged medically unfit on the 25th July 1918.
http://nla.gov.au/nla.news-article159095235 - report of welcome home to be held by the Islington Military Presentation Committee.
http://nla.gov.au/nla.news-article159095764 - welcome home at the Tighes Hill Rosedale Hall.
I have not located Mr. Wood’s name inscribed on any known War Memorial or Roll of Honour. Note - Islington never produced a War Memorial or Roll of Honour, only 2 Church Rolls of Honour.
I located Joseph resting in an unmarked grave, another Forgotten Digger of The Great War, so August 2020 I placed a cross adorned with poppies on the gravesite, taken a photo of the grave and uploaded the photo onto the Northern Cemetery website as a permanent record of his service.
http://sandgate.northerncemeteries.com.au/.../index.php...
I will be submitting an application to DVA this month asking for a Commonwealth War Graves Plaque, curbing and marble chip to restore Honour and Dignity to Joseph.
Contact with descendants would be greatly appreciated.
Lest We Forget.
at November 15, 2021 No comments:

We are delighted that our member Anne Gleeson has joined as a co-editor and author of this blog. Anne, who has lived in the local region for many years, will be researching and sharing stories of  local people and places here on our blog.

In this, her first post on our blog, Anne recalls a family outing.

We picnicked or went for Sunday drives or visited family or friends just about each Sunday when I was a child. As an adult I have come to realise this was most likely because there was never much money to spare in the family and with five kids it was probably easier to take us out than to amuse us at home.

We often took my grandfather with us on these adventures. Mum and Dad and the five of us kids and Grandpop would load into Dad’s green Austin A40. This was of course in the days before rules about seat belts and passenger loading in a car.

On this particular Sunday we went to Pelican foreshore for the picnic. We swam and paddled about in the water before lunch and developed a healthy appetite ready for the picnic lunch which was generally sandwiches and homemade cake followed by a drink of juice or “make-up” cordial. Dad and Pop probably shared a beer and mum would have had a cup of tea from the thermos.

As we waited the obligatory hour before we were allowed to go back in the water after lunch (in case we got cramps and drowned) Pop called our attention to something floating along in the water. It was a very large shark swimming back and forth not far from where we had been swimming earlier in the day. Mum decided that even though the shark swam off there would be no more swimming for us that day. She did not get too much of an argument from me. The shark had come in pretty close to shore and Pop had picked up some pebbles and thrown them at the shark. He said he was trying to scare it away so we could go back in the water.
Fast forward about 40 years and we are now living close to shore of Lake Macquarie. My eldest granddaughter used to ask me with the regularity of a four year old. “Grandmother, do you think there are any sharks in that water? My Mum says there probably isn’t” I would ask her “do you think there are sharks in there?” and she would say “tell me the story about when you were little and you saw a shark?” And I would tell her the story about my Pop and what became known as the Shark Picnic. I told her that story probably about thirty times.

As the health of Lake Macquarie improves and shark sightings become more commonplace in the lake it is a positive thing that the sharks and dolphins have made their way back into this amazing natural wonder.
at November 12, 2021 2 comments: 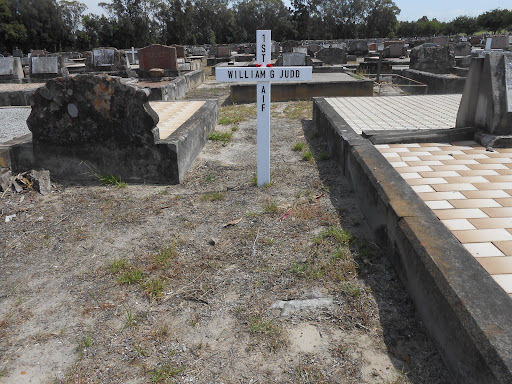