Captain Julian Frank De Meyrick's name is inscribed on  The Toronto and District Soldiers' Memorial that was unveiled in 1922. http://nla.gov.au/nla.news-article140016035.
The year after the Captain's return from overseas the De Meyricks welcomed a son, John Julian De Meyrick.
Some time after John's birth the family moved to the Liverpool area in Sydney.
John followed in his father's footsteps enlisting in the AIF in1939. 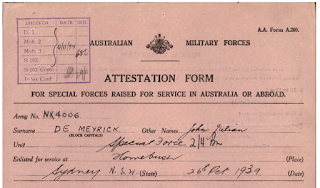 NAA : B883 NX4006
John Julian de Meyrick is memorialised on The Athens Memorial within the Phaleron War Cemetery in Greece. 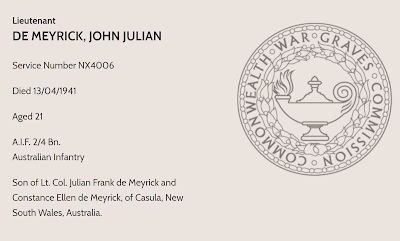 Brides and Grooms from Awaba

An article in the Newcastle Morning Herald and Miners' Advocate that is rather difficult to read includes a photo of Lake Macquarie's own Parker Brothers. Following is a transcription of that story.

Mr George Parker, the eldest of four brothers whose ages total total 335 years died at the home of his daughter, Mrs M. Kells of Brighton avenue, Toronto, last Thursday He was 87. The three surviving brother are Charles 85, Henry 83 and Joshua, 80, all of Dora Creek. Charles and Henry were not present at the funeral yesterday owing to illness. The Parker brothers are well-known lake fishermen.

Mr George Parker, who was born at Botany, came to Toronto 68 years ago. Fishing has always been his hobby, and occupation. He took a keen interest in boat and skiff sailing. On 9 November 1880, at Belmont Regatta, he won the fishing boats silver cup in the Alpha.He sailed for and with Mr W Arnott , in the 16 foot skiff Mayfield until she was barred from racing owing to her speed. On Sydney Harbour he sailed with the late Frank Aldridge. The last race he took part in was in the famous skiff, Renown at the age of 70.


We would love to hear from anyone with stories of the Parker Brothers.
at June 19, 2020 1 comment:

As a committed geneablogger I am always championing the benefits of blogging.

Since becoming President of The Lake Macquarie Family History Group last August I have been hoping to set up a Group blog so I was delighted when the Committee supported my proposal to create this blog at our last Committee Meeting.

I see the blog as an integral part of our communication strategy for both promoting our Group and preserving its history and as a forum for sharing stories of the people who lived and worked in Lake Macquarie. I am hoping that our members and people from our local area will embrace the blog and share their stories of life on the Lake.